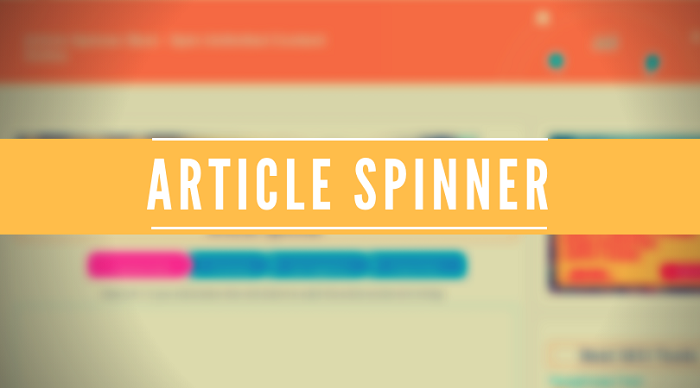 That depends upon who you are asking, people love or hate the article spinning. In a few circles, this has built up the bad name because of a hoard of the dodgy web marketers who are doing this wrong. Never be that guy! What a bad guy will do is to take the article from one website, plug this in a few article spinning tools and allow this automatically spin on lowest quality settings. It means that they get a unique article, which will generate insane copies. This means that they will end up with many garbage that nobody will be able to read.

The article spinning still is the strong force when done it rightly. Actually, we all know of some popular, successful and professional SEO services that make use of the article spinning. But, in public, they will call it “article rewriting” however on a back end it still is the same thing. However, the main difference is that they make use of the low volume. For instance, they may generate ten to twenty versions of just one article and will submit it to Web 2.0 and private blog networks.

While it comes about concepts of SEO & commercialization of the contents for the quality article rewriting will be recommended out to a team. Logically articles writing generally take a huge amount of time when compared to the article spinning or production of the quality contents. The article spinning produces many contents however off very poor quality thus not suggested out for the SEO purposes or delivering out best to the esteemed client. Article spinning by the software is generally rejected out by the clients as they do not satisfy the requirement by many organizations in the serious need of the contents of the article.

Do you ever do any research-based assignments and essays at school? So, how often do you sit with the blank paper and begin writing about a subject? My guess isn’t often. Even lecturers told us how to do this right: “do a little research or rewrite it in your words”. Anybody who tells you that they went through the school or university without even using any thesaurus function in the Word is lying, inefficient and has a lot of time on hands. The article rewriting is that. Taking a few contents, and then rewriting in your words. The final result has a similar meaning, it reads totally different and may have traces of own opinion. It is a basis for ALL information that you may readout on a web. There actually is little original content at the grand scheme of the things.

Finally, article rewriting perfectly is acceptable providing you are not ripping off the content for each word.

Looking to its Future

The article spinning, like technology, is dead functionally and has been a little time now. Although it might be having the resurgence among the students, it is the tool that does not fool Google with reliability or was not meant to fool even humans. The usefulness as an SEO tool will be done and was not very useful for the students. Definitely, some may still try and use this but the success can be, at best, restricted.

However, that does not mean it is an end for the automated authorship, particularly as the artificial intelligence steps high and starts writing more compelling works. We already have seen beginnings of that at upper tiers. AI authorship is just going to be better, cheaper and easier, and soon making this practical for the spammers and the students alike.

Article spinning might be effectively dead, however, it can likely get replaced fast by something that most can see scarier whereas others can see as more promising.

At the end of the day, the article spinning was the basic technology. So, taking the article and using the thesaurus to replace the words is not difficult and clever. It is the idea that is both simple to implement as well as is very effective, in terms of numbers. However, in this never-ending war between the spammer and the search engine, this was the hopeless dead end.

Are you interested in SEO that actually WORKS instead talking?

SERP GO is a SEO, website management and digital marketing company based in India. We are highly experienced in the market to provide quality services to our clients at very reasonable cost. We reasonably believes in making provisions at very fair prices, flexible and reliable uncomplicated internet management, and web marketing solutions.